Spice of the Week: Poppy seed

“In Flanders Fields the poppies blow” is the chilling opening of the famous poem by John McCrae which immortalized the poppy in war literature. But – you guessed it – there is a lot more to poppies and their seeds than just this wonderful poem.

Did you know, for instance, that even though the seeds are not poisonous, they contain a small amount of opiate? And that many countries preventatively have forbidden planting poppies without explicit permission? No wonder that it was once considered to be sacred to Hypnos, the Greek god of sleep. Ancient Greeks and Romans even used an infusion of poppy as a sleep aid and stomach soother.

But if you’re into cooking, check out the BLE. A recipe (as well as much more details on its fascinating history) are found on the poppy card!

In a small pot, mix sugar and milk or water and simmer for 5 minutes. Add poppy seeds, raisins, honey and lemon peel, and continue to simmer for another 3 minutes, stirring constantly, until the mixture thickens. Allow to cool before using on cakes, buns or pastry. 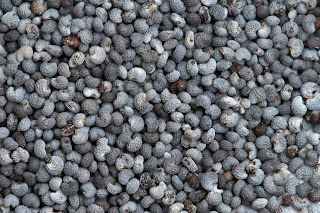