Do you like picking wild mushrooms? If so, be careful not to pick a Funeral Bell, because they are almost as dangerous as the much better-known death caps (Amanita phalloides), and even contain similar toxins.

Galerinas are small mushrooms with broad, almost flat cap, bearing a small central brown bump. Galerinas grow primarily in spruce and pine forests, on rotting logs and stumps. They can be found on every continent of the northern hemisphere, and have even been found in Australia. Galerinas may be mistaken for well-liked and sought-after sheathed woodtufts, which are noted for their sweet fruity smell and occurrence on deciduous wood.

This small mushroom causes very serious poisonings. The toxins it contains are not broken down by heat, and remain poisonous even after being thoroughly cooked. A fatal dose for an adult is around 10-15 mushrooms - considering how small and thin they are, that is not very much material. Poisonings have an effect similar to that of the death cap - damage to liver and kidneys. The smaller number of poisonings, compared to the death cap, is somewhat due to its relative scarcity, but largely because most pickers regard all small mushrooms growing from stumps as inedible 'toadstools'.

Want to see other poisonous fungi? Nothing is easier than looking at our Poisonous Nature topic on BLE.
Posted by BHL-Europe WP5 No comments:
Email ThisBlogThis!Share to TwitterShare to FacebookShare to Pinterest

Spice of the Week: Cinnamon

A few weeks ago, we put the spotlight on Cassia in our “Spice of the Week” series. This week, we focus on one of its relatives: cinnamon. 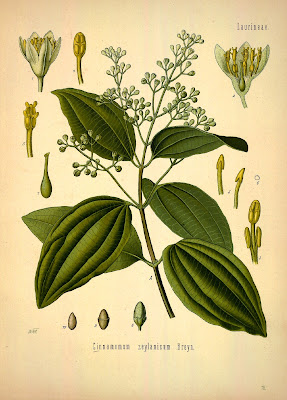 Though a very common spice today, its origins were long shrouded in mystery. It was known in ancient Greece and Rome, but no one knew where it came from! A fable by Arab merchants claimed that wild raptors went looking for cinnamon in faraway lands and brought it back to line their nests. Brave Arabs then stole cinnamon from the nests to sell it. According to the storyteller in “1001 Nights”, cinnamon even grows on the bottom of a secret lake! But alas, the truth is less spectacular. Cinnamon comes from the Cinnamomum verum tree. 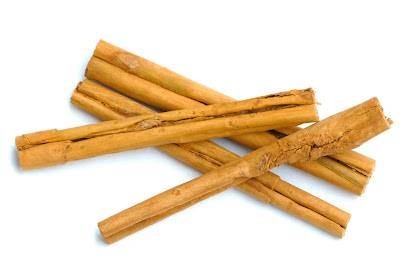 Our Cinnamon recipe is:

Slowly heat cinnamon and water, add ground coffee, remove cinnamon and pour into cups. Heat a spoon over a flame, place sugar cube in spoon pour on cognac and set alight. After flame goes out, place contents of spoon into cup. Repeat for each cup prepared. Decorate with whipped cream. 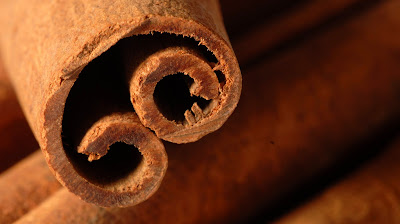 Check out Cinnamon in the Biodiversity Library Exhibition! Stay tuned!
Posted by BHL-Europe WP5 No comments:
Email ThisBlogThis!Share to TwitterShare to FacebookShare to Pinterest

Do spiders creep you out? If so, Atrax robustus could be a nightmare for you! This guy often lives in courtyards in Sydney's suburbs. And did you know that in some parts of Australia, Atrax spiders are considered more dangerous than poisonous snakes?


Atrax robustus is the most feared spider in Australia. It has a relatively small black-brown body. Females can be up to 7 cm long, while males are somewhat smaller at 5.5 cm. Its chelicerae (fangs) can be up to 5 mm long. It lives under logs and rocks in forests, parks and urban gardens in southeast Australia. Like other members of the infraorder Mygalomorphae, it builds funnel-shaped webs, made of spider silk. It is very aggressive and often attacks anything coming close to its nest. When threatened, it rears up on its hind legs and rocks its body. It attacks by jumping onto its victim and delivering a very painful bite.


Atrax poison is neurotoxic and extremely strong; initial symptoms appear within ten minutes, and death can occur within a few hours. Besides burning pain, the bitten area swells. Lymph nodes become infected, salivation increases, along with sweating, tearing and urination, sometimes accompanied by nausea, diarrhea, vomiting and ague. Further symptoms include stomach cramps and a tightening sensation across the chest. It is interesting that poison from this spider is extremely dangerous to humans and other primates, while other animals are essentially immune to it.


Do you like these venomous creatures? If so, you can see more of them in our series poisonous nature on BLE. Stay tuned to us.
Posted by BHL-Europe WP5 No comments:
Email ThisBlogThis!Share to TwitterShare to FacebookShare to Pinterest

Conquering of the North Pole

Winter is underway, so it's time for the story of one frosty adventure. More than one hundred year ago, Robert Edwin Peary set out on his expedition to the North Pole. And do you know which animal he would meet during this adventure? All of this you can see on our BLE –Expeditions.

The steamship Roosevelt, with Peary's expedition party aboard sailed from New York. After a stop in the Canadian port of Sydney, Nova Scotia, the Roosevelt arrived in Etah, Greenland on August 8th, and continued on to Cape Sheridan on Ellesmere Island, where they spent the winter. From a base station on Cape Columbia, the expedition set out in February, 1909.

On April 2nd, the remaining distance to the pole was only 224 kilometers. Peary and Matthew Henson, together with Eskimos Ooqueah, Eginghwah, Seegloo and Ootah, using five sleds and 40 dogs, with superhuman effort, marched for five days. On April 6th, 1909 at 10am, Peary and his team reached 89°57'. After a short rest, they set off again and late that afternoon reached the northernmost point on the earth.

Civil Engineer Robert Edwin Peary was born on May 6th, 1856 in Cresson, Pennsylvania, died on February 20th, 1920 in Washington, and is buried in Arlington Cemetery. A peninsula in northern Greenland is named Peary Land, in his honor, and a passage in the north Canadian Arctic is named the Peary Channel.

Close to the North Pole you can meet walruses. Walruses are typical inhabitants of cold Arctic waters. These mammals, which are closely related to sea lions, can weigh up to 1700 kg and growing to lengths of 3 m. They eat mainly snails, clams, crabs and echinoderms.

More of interesting stories are waiting for you on BLE, Stay tuned!
Posted by BHL-Europe WP5 No comments:
Email ThisBlogThis!Share to TwitterShare to FacebookShare to Pinterest

Christmas Holidays are behind us, but why not extend a little bit of this wonderful feast atmosphere by presenting our new content highlight - holly? Did you know that tradition states that a sprig of holly placed inside the entry-way doorframe guards the home against lightning strikes? Or that holly was also revered by Celts, Romans and Germans as a symbol of eternal life?

Christmas holly is one of the symbols of Christmas. Christian folklore states that holly thorns represent Christ's crown of thorns, and the red berries his blood. Holly captures our attention with its prickly, waxy leaves and later, its bright red berries. Its home is western, central and southern Europe, northern Africa, Asia Minor and northern Iran. It is often planted as a decorative shrub in parks. From May through June it blooms with tiny white flowers. In the fall, these give rise to small red berries. The plant contains the alkaloid theobromine, as well as other substances like saponins and terpenoids.

Cases of poisoning occur mainly in children, from consuming the bright red berries. Symptoms are nausea, strong diarrhea and sleepiness. Initial symptoms can occur in children with the consumption of as few as two berries. A fatal dose for an adult is considered to be 20-30 berries. However, newer research suggests that even larger doses cause only vomiting and diarrhea.

We wish you a Happy New Year in 2013, and promise you to bring many more exiting stories from Natural History. Stay tuned! You can find more about Holly on BLE - Poisonous Nature!