Pebernødder (pepper nuts) at Science on a Plate

Over the weekend, BHL-Europe was present at the Science on a Plate-event of the Royal Botanic Garden Edinburgh. We presented our Biodiversity Library Exhibition, with a special focus on our Spices-exhibition! Graham Hardy of the RGBE baked pebernødder, or pepper nuts. A full recap of the event follows next week, but for now, please check out this recipe for pepper nuts. 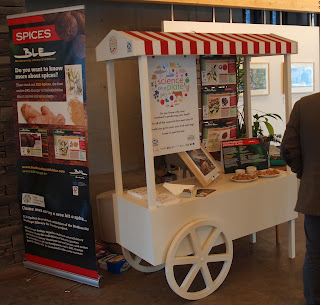 Spiced Christmas biscuits are a feature of many countries, particularly in northern Europe. This recipe is for Danish pebernødder, but similar biscuits are called pfeffernüsse in Germany and there is a Dutch version that is coated in chocolate! British gingerbread is not that far removed from these spiced biscuits, the main difference being that it only contains ginger instead of a range of spices.

Mix fat and flour, add everything else and work to a smooth dough. Keep cool. This dough can be stored in the freezer. To make the ‘nuts’ form the dough into small balls no bigger than a marble. Bake at 180°C for 8-10 minutes (fan ovens may need a slightly lower temperature). When baked the pebernødder should have a crunch to them and be golden brown.

MAKING SPICE BISCUIT CHRISTMAS TREE DECORATIONS
The same dough can be used to make biscuits that can be decorated with icing and hung on the Christmas tree. Roll the dough to 3mm thickness and use biscuit cutters to make shapes. A drinking straw works well as a cutter for making holes in the biscuits. Baking temperature and time is as above.

When the biscuits have cooled they can be decorated with icing. Pre-prepared coloured icing is available in handy tubes if you want to keep things easy.