The entire BHL-Europe team wishes you a very happy holiday season and a wonderful new year! 2012 looks to be very promising for BHL-Europe, as we enter the final stages of portal development.

But don't forget that a lot of content is already available through Europeana or through the Biodiversity Heritage Library. Definitely worth a browse over the holidays!
Posted by BHL-Europe WP5 No comments:
Email ThisBlogThis!Share to TwitterShare to FacebookShare to Pinterest

On 28 October 2011, the aptly named Sherborn Symposium celebrated the life and legacy of English zoologist Charles Davies Sherborn (1861-1942). The symposium (organised by the International Commission on Zoological Nomenclature, the Linnaen Society of London and the Society for the History of Natural History) focused on the future of zoological nomenclature, while simultaneously honouring its origins.


And those origins go back to Sherborn’s magnum opus Index Animalium – a catalogue of every living or extinct animal described between 1758 and 1850, along with the book or publication it was first named in. A massive achievement by any standard, Index Animalium covers about 9200 pages which appeared in eleven volumes between 1902 and 1933. Sherborn spent 43 years of his life working on it – and even today, many zoological disciplines continue relying on it as an important source for references.

Currently, the major part of the works indexed by Sherborn are easily accessible at BHL or are currently being digitised by partner institutions of the BHL or BHL-Europe consortium. This means researchers can easily verify the original sources directly, and see whether the information in Sherborn’s Index is still up to date.

The Index itself was digitised by Smithsonian Institution Libraries in 2004, and can be consulted online. Currently, SIL is working on new indexing facilities that will link the Index directly to Sherborn’s cited literature sources, which were given in cryptic abbreviations and acronyms. Accordingly, BHL could provide links from the digitised literature sources to the taxonomic names extracted from the early works by Sherborn’s Index and similar projects. This would definitely be useful for researchers who need to find the original descriptions of animal species and genera, making it a useful supplementary service to the “Taxon Finder”-tool.

In the wrap-up discussion of the Symposium, Richard Pyle  focused on the idea of a Global Names Architecture that interconnects all existing biodiversity related data initiatives, ranging from gathering specimens in the field to reviewing the published legacy and publication of new taxa.

It is estimated that in 2020, 80% of all research output will only be published in digital form. Which goes to show that the first ever summit on digital preservation, held in Hamburg, Germany, from 19 to 20 October, proved to be more relevant than ever. 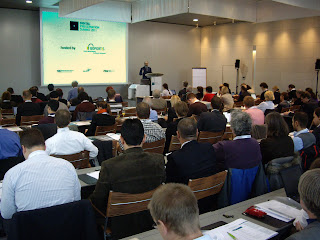 One of the common threads throughout the summit was the lack of public awareness for the importance of digital preservation. In the words of Steve Knight from the National Library of New Zealand: “Digital preservation is about as familiar to people as space walking”. How fitting that he chose to illustrate his point with the loss of NASA’s original records on the first moon landing, which – however tragic – was probably not considered a sufficiently serious disaster to raise awareness of the issue.

Then again, people in general often don’t know how important it is to preserve the cultural and scientific heritage. The destructions of various libraries in history, especially in the Western and Arabic world, are a testament to this public ignorance which hopefully will one day be overcome.

But much more will be needed than just goodwill to preserve our heritage. The lack of a standard software system means that technology is an issue as well. Instead of the many individual solutions that are in use today, the future will see a need for final productive solutions that can cope with much larger amounts of data!

And thus many issues remain to be debated…

Posted by BHL-Europe WP5 No comments:
Email ThisBlogThis!Share to TwitterShare to FacebookShare to Pinterest

We are happy to announce new collections available via Europeana.

Via Europeana (www.europeana.eu) the digital collections of European museums, libraries and archives are easily accessible for everybody. One of the goals of the BHL-Europe project is for people to find the digital biodiversity publications not only via the BHL-portal, but also via the Europeana portal. 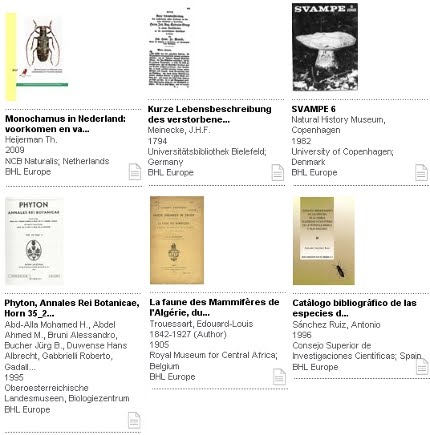 A lot of partners are in the process of uploading their digital content to the servers of BHL-Europe. While our technical partners are currently working on and testing the BHL-Europe portal (to be launched in a few months), some of the digital content is already available via Europeana. The newest items include digital publications from Spain, the UK, Belgium, Germany, Denmark and Finland. As our partners continue uploading their content, this collection will only grow.

To have an overview of all the 96.595 items of BHL-Europe already on Europeana please follow this link: BHLE-Europeana To have a look at the content from different countries or partners refine your search by selecting one or more countries (see figure) or click on one of the links below.
Posted by BHL-Europe WP5 No comments:
Email ThisBlogThis!Share to TwitterShare to FacebookShare to Pinterest 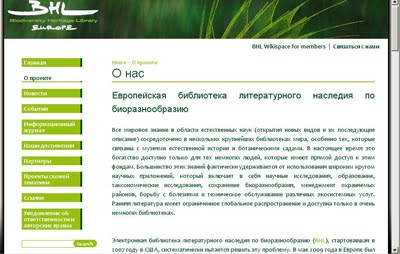 The project website has been updated. The website still looks more or less the same but it is now transferred to a Content Management System, Drupal, which will make it easier for the Communication Working Group to update events and news.
You can find new news about the project, recent events by our partners, more detailed information for partners (see BHL-Europe in a nutshell and Intellectual Property Rights) and very soon our next newsletter.
The “Home page” and “About us page” are now available in eight different languages; English, German, Italian, Spanish, Slovakian, Russian, French and Czech.

Have a look at: www.bhl-europe.eu
Posted by BHL-Europe WP5 No comments:
Email ThisBlogThis!Share to TwitterShare to FacebookShare to Pinterest

From the start of BHL-Europe, the project uses a newsletter to inform partners and users about news from the project itself, Europeana, BHL or other related projects. The newsletters are published almost every three months and the next one will be out very soon. To be able to inform people who are interested in the project more frequently and to be able to reach as many people as possible, the communication group started researching the Web2.0 possibilities for the project. As a result BHL-Europe now has a Facebook page since October 2010 and a Twitter account since February 2011.

This blog is a third option to share the most recent news about the project development, news from partners, similar projects, conferences, …

These three channels together with the newsletter will be connected to each other and share the same information (more or less detailed) but will have there own newsflashes too.

Please visit the BHL-Europe news-channels and don’t hesitate to join one of them.