We are glad to announce that BHL-Europe portal is finally live since today! Please see below a little summary.

The Biodiversity heritage library for Europe project (www.bhle.eu) began in 2009 and joins noteworthy European museum and botanical gardens, including some in the USA as well. 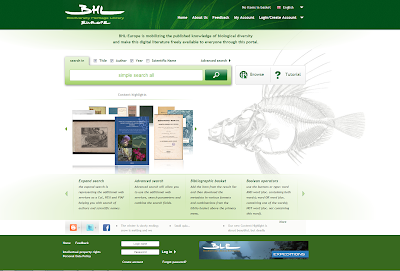 The primary goal of the project was to create an indexed archival system for digitized scientific literature, and free access to this literature via a multifunctional portal (www.bhl-europe.eu). The digital copies of this literature are thus freely available to all, scientists and public alike. The portal officially goes live today, March 18th, 2013.

Literature on the BHL-Europe portal comes from numerous European and also some non-European institutions and their libraries, and contains many unique items, difficult to access otherwise.

The web portal is available in 14 languages. It is possible to search in the literature (monographs, magazines, various book editions and professional journals) by using various features on the site, such as by either scientific taxonomy or local (common) names and synonyms. The results may then be viewed directly online, or downloaded as .pdf, text (OCR) or images (.jpg). The portal offers many additional functions. 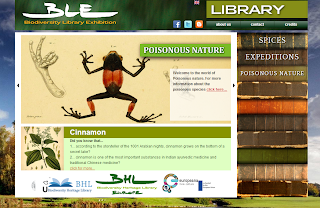 The BHL-Europe portal (and other international sources) is linked to the Biodiversity Library Exhibition (BLE, www.biodiversityexhibition.com) platform, which publishes selected literature in the form of interesting themes, information and an attractive design. Thanks to the specific presentation of literature and interesting scientific items, the platform has significant educational potential. The BLE platform was developed by the National Museum as part of the BHL-Europe and OpenUP! projects, and is constantly expanding. 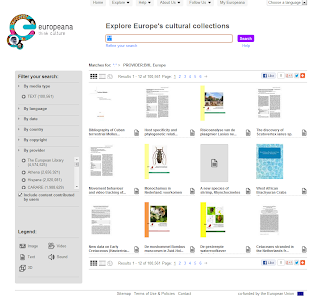 The collected literature of the BHL-Europe project is also presented on the Europeana portal (www.europeana.eu), which makes available huge quantities of material from various European collections (over 20 million objects). These objects encompass various types of European cultural heritage items, such as architecture, history and art. Natural history literature is on this portal mostly present by BHL-Europe, which can be found at: http://www.europeana.eu/portal/search.html?query=*:*&qf=PROVIDER:BHL+Europe.

The release date of March 18th was not chosen at random – the date coincides with the release date of the American portal BHL US/UK/Australia (www.biodiversitylibrary.org/) in its new user interface. BHL US/UK/Australia functions principally as an aggregator of scientific literature in the USA, much like BHL-Europe does in Europe. The portals currently differ in their function and content. Our cooperative venture creates better access to scientific literature in a world context, and functions as a digital literature archive. The joint release of these two portals permits dissemination of this information in a much broader scope, all over the world. 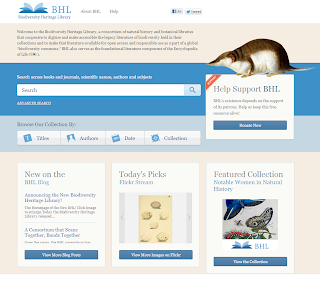 The BHL-Europe portal makes available 6,149 books containing one million pages from 92 content providers at the moment, but this is just the initial offering. New material is added every day, and the growth is projected to increase over time.

The goal of making this portal is a stable and constantly-growing service for various scientific institutions, and primarily for the public world-wide.
Posted by BHL-Europe WP5 No comments:
Email ThisBlogThis!Share to TwitterShare to FacebookShare to Pinterest


The winter is slowly ending; snow is melting and we dedicate a short piece to one of the largest mammals from the last Ice Age – the woolly mammoth (Mammuthus primigenius).

During the late Pleistocene, Mammuthus primigenius occupied the grassland areas of Eurasia and North America. This mammal, closely related to today’s Indian elephant, grew to 4.5 m and could weigh up to 4000 kg. It fed mainly on different sorts of grass. The hair of Mammuthus primigenius was up to 60 cm long and its color ranged from tawny through brown to black. In addition to bones, scientists have recovered much information about Mammuthus primigenius from frozen specimens in Siberian permafrost.

As a matter of fact, it is not true that all Woolly Mammoths were large animals. The dwarf subspecies of Mammuthus primigenius grew only to 1.8 m in height. This small chap occupied Wrangel Island from approximately 10,000 to 2,000 years BC! So these dwarf mammoths lived during the times of building the Egyptian pyramids.

The extinction of mammoths is still a matter of debate. There are two possibilities currently under consideration, climatic change and human influence. Today, more scientists prefer the first option – climatic change. They claim that the occurrence of prehistoric people in Siberia was very rare, so they were not capable of killing off thousands of mammoths.

If you are interested in these prehistoric creatures books from BHL portal contains much information about woolly mammoths. Stay tuned!
Posted by BHL-Europe WP5 No comments:
Email ThisBlogThis!Share to TwitterShare to FacebookShare to Pinterest
Newer Posts Older Posts Home
Subscribe to: Posts (Atom)