Spice of the Week: Black Pepper

Black pepper is one of the oldest and most widespread spices in daily use. It comprises a whopping 30% of the world trade in spices.

As a spice, black pepper consists of the dried, unripe berries of the climbing bush Piper nigrum. The pods are harvested before they are ripe, as soon as the bottom pods start to turn red. After drying, the peppercorns get their wrinkled texture and reddish-black to black color! 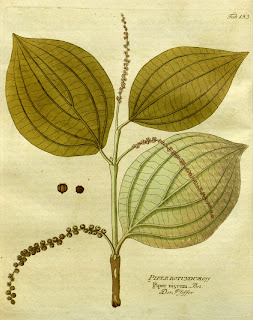 And while the phrase “black gold” nowadays mostly refers to oil or even coffee, it was once used as a moniker for black pepper. It used to serve as currency for paying annuities, dowries, taxes and other payments. One ounce of pepper was valued the same as one ounce of gold!

Check out this fascinating spice in the Biodiversity Library Exhibition!


Pound beefsteaks to tenderize, pound in pepper from both sides, salt to taste and sear in oil three minutes on each side. Remove, simmer thinly sliced onion in drippings, return meat, pour cognac over meat and light on fire. Blow out fire and add butter. Pepper steak is served with fries and salad. 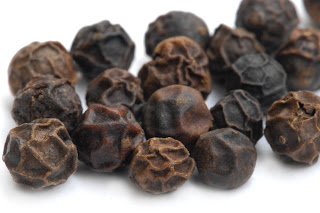