Spice of the Week: Angelica

The Biodiversity Library Exhibition (BLE) features 52 different spices, and their representation in old biodiversity literature. To celebrate the launch, we’re kicking off a brand new weekly series on this blog. “Spice of the Week” will be just that, a presentation of each spice and just a hint of what the virtual exhibition has to offer.

First up, angelica root. In the middle ages, angelica root was regarded as some sort of miracle ingredient. It was used as an exceptionally effective anti-toxin, and it was one of the ingredients of the legendary “red eye”, a quack remedy that proved to cure all ills. Legends had after all declared angelica to be blessed by the angels and to be given to mankind by the archangel Michael himself. 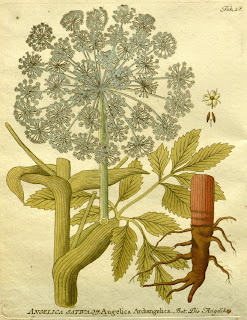 More on Angelica, including the books it’s featured in and a nice recipe, is found in the Biodiversity Library Exhibition!

Separate leaves from stalks and cut both into 12 cm lengths. Place into an oven-safe bowl. In a separate pan, mix sugar with 300 ml water and bring to a boil. Pour the boiling syrup over the angelica, making sure the angelica is well-submerged. Let stand in a cool place for at least 24 hours. Then move to a pan and boil again, until the stalks and leaves acquire a bright green color. Finally, drain, let drip dry and after thorough cooling, roll in powdered sugar.
Posted by BHL-Europe WP5
Email ThisBlogThis!Share to TwitterShare to FacebookShare to Pinterest